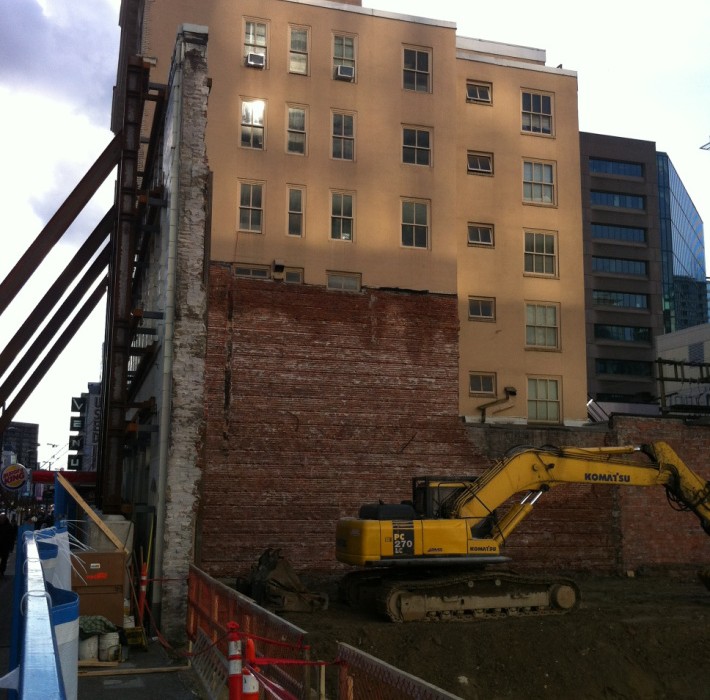 Yesterday’s announcement of the sale of the Waldorf Hotel to the Solterra Group of Companies is yet another gutting action by small, special interest groups, (read as common, everyday capitalists), against Culture in Vancouver. That wasn’t a typo – I’m talking about a specific kind of large “C” – Culture here. There are after all – even in Vancouver – many forms of culture floating about. There’s the Culture one might take in while at an art gallery, a performance of live music, a festival, or even a craft sale. There is also the culture one might participate in while torching a police cruiser. It seems that the city of Vancouver is long past due deciding which kind of (C?)culture it wishes to support.

To date, it seems sadly in the camp of culture. Sure Mayor Robertson claims that “Supporting Vancouver’s dynamic arts and culture sector is a top priority of City Council”, but notice he used the small “c”. The truth is that the city, (and of course their big brother the provincial government), are really only interested in promoting a particular kind of culture. Think about it. No one bats an eye at spending $514 million to replace the roof on a seldom-utilized sports arena. Liquor licenses and development abounds in Vancouver’s “Entertainment District”, and let’s not forget the pinnacle of the city’s cultural calendar: The Fireworks! These events or venues are really nothing more than symbolic capital at worst, at best points of spectacle where an urban population might experience a fleeting cathartic release. What they very definitely do create is an infantilized populace. Never encouraged to think for themselves, or heaven forbid participate, Vancouver’s cultural scene walks around rubbing its eyes that have been blinded by all the flashing lights while wondering why they feel so detached from it all. These are the same symptoms that cause people to riot when a hockey game doesn’t quite go their way.

What Vancouver really needs is Culture; however this is a much more difficult thing to create. It’s like a finicky houseplant – not only does it need water, sunlight and fertilizer to thrive – it needs just the right ratio of all those things. Culture needs a lot more than three ingredients but possibly none more than creative people and a place where their talents can be supported, explored and ultimately grow. The Waldorf is just such a place, and don’t for a second think that they come around very often. Run by a bunch of former punk rockers, which should attest to how miraculous its very existence is, the Waldorf returned like a phoenix, seemingly from out of nowhere, just three years ago. Since then it has hosted the New Forms Festival, the weekly Food Cart Festival, the PuSH International Performing Arts Festival, the East Side Culture Crawl, the monthly vintage clothing bazaar Chosen Ones, not to mention countless music and art events. What may be more important is the atmosphere that this Culture happens in. This isn’t a stodgy commercial gallery or the Commodore – this is a community based arts hub that encourages people to bring their own ideas to the table. The Waldorf is the kind of venue that gives people the courage to explore. This is where Culture starts.

Consider: was the mid-century cultural zenith of New York City about Carnegie Hall or the construction of the Guggenheim Museum? Nice places sure. However I would argue that the explosion of Arts and Culture in post war New York that made it the cultural mecca of the western world had far less to do with these nodes of cultural capital than the communities that fostered the artists themselves. The Tenth Street galleries on Manhattan’s east side and the coffee houses of Greenwich Village were the community-based hotbeds that conceived and perpetuated so much of New York’s Culture in the 20th Century. Of course Vancouver is no New York, but all the more reason for these kinds of opportunities to be seized upon. The peripheral nature of our city, coupled with the pressures of real estate speculation and exorbitant costs of living, means that particular attention needs to be given to fostering Cultural growth. At the very least support what we already have!

Every Christmas I get into an argument with a friend of my Father’s who is a developer. He feels that if he has the money to buy a property he should be able to do with it as he pleases. Evict tenants who have lived in the building for years, do a quick and dirty reno and put the suites back on the market at three times the value. Why not? Well I suppose in a capitalist system, and given the civic governments will, there isn’t really much to stop him or other developers like our friends at Solterra. The question I always have to ask him though is to what end? What kind of city do you want to live in – a city that only the rich can afford to live in? Is it healthy for a city to be filled with condos that sit empty while offshore speculators wait for the market to “spike”? Are communities built in neighborhoods that are too expensive to accommodate things like movie theatres, arts venues, schools, and small businesses? The fact that every Christmas my argument falls on deaf ears continually drives home the point that if left to their own devices developers will not act in the best interest of our city – the place we live.

This fact brings us back, of course, to our civic government. Do they have both the capacity and will to support this kind of agenda – basically building a real city and corollary civil society? Or do they in fact have reason to fear this kind of program? It may not be unreasonable to consider that those in power actually don’t want to encourage Culture because they can’t fully control its production. Think about it. How easy is it to control every possible outcome of the Symphony of Fire? Even in the midst of the hockey riots of two years ago everything was always going to work out exactly the way those who control the means of production would have had it – vis-a-vis more control. If that sounds like the rantings of a mad, conspiracy theorist consider that this is one of the few logical conclusions one might draw from such a blatant disregard for something that is so essentially human. I like to wonder what would happen in Toronto if an analogous institution, say the Drake or the Gladstone, where to face a similar fate. Well, honestly, it just wouldn’t happen.

Where does this leave us – the citizens of Vancouver? Well we could all go ahead and riot – except we won’t because Culture doesn’t inspire this kind of response. A more effective action would be to avoid, at all costs, the sanctioned spectacle. Continue to exhume the vestiges of Culture that this city can sustain and support them fiercely. Alternatively we could all just move to Toronto.